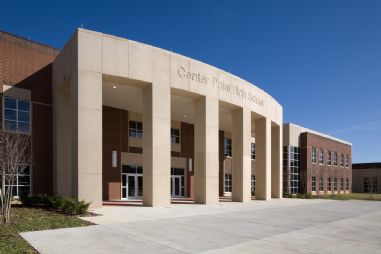 This design project is for a new high school replacing an aging facility (Erwin High School) that will be renovated and used as a middle school.  The new high school is located on a wooded, undeveloped site in the midst of an older, heavily populated suburban area.  The building consists of a two‑story academic and administration wing containing the administrative suites, media center, and classrooms; a one‑story activities wing consisting of the cafeteria and kitchen, band and choral space; a 650‑seat auditorium; a 400‑seat physical education gymnasium; and, a 1,500‑seat competition gymnasium and associated storage, classrooms, and locker/shower rooms.  This wing has its own after-hours entrance and lobby, which allows the remainder of the school to be secured for after-hours events.  The two wings are configured such that daylight into all areas is maximized.